Muhammad the Messenger of Allah ( Arabic ﷴ followed by صلى الله عليه وسلم ṣall Allāhu ʿalay-hi wa-sallam "May Allah honour him and grant him peace") (ca. 571 - June 8, 632) is the most important of the prophets of Islam and the final prophet and messenger according to the Quran and Sunnah. He was also active as a diplomat, merchant, philosopher, orator, legislator, reformer, military and general.

The most definite date of the Prophet's birth that has been recorded is 12th of Rabi' aI-Awwal.

He was born in A.D. 570/571 in the once prestigious but losing Bani Hashim clan of the Quraysh, the ruling tribe of Mecca, a city in the Arabian peninsula, on a Friday (Juma).

Muhammad traces his lineage through his ancestor Adnan back to Ishmael, the son of Ibrahim (Abraham). His father was Abdu'llah, the son of Abd al-Muttalib (Shaybah ibn Hashim), the son of Hashim, the first Hashemite. Abdu'llah died before Muhammad's birth while his mother Aminah bint Wahb passed away five to six years later.

Muhammad صلى الله عليه وسلم grew up outside the city in the desert with the family of Haleemah bint Abi Dhuayb, a bedouin wet nurse who nurtured him. According to the contemporary Arab customs, babies were sent outside the city to bedouin (country) families as they thought the environment was healthier and more suitable for growing stronger children. A number of miraculous incidents is reported to have occured with Haleemah's family with the coming of Muhammad which includes the ripping of young Muhammad's صلى الله عليه وسلم chest by archangel Gabriel who washed his heart with zamzam water to purify him (taken from Sahih Muslim) .

Muhammad صلى الله عليه وسلم was sent back to Aminah before she went on a journey to visit her husband's grave and died. The boy's charges were taken by his loving grandfather Abd al-Muttalib, who loved him more than his children and always gave him a special treatment. When Abd al-Muttalib passed away leaving his eight year old grandson, it was Muhammad's uncle Abu Talib ibn Abd al-Muttalib, the father of Ali and Banu Hashim's new leader, who took his reponsibilities. He remained by his nephew's side until he died some years after Muhammad's prophethood at the age of 40.

At the age of 9 or 12, Muhammad صلى الله عليه وسلم accompanied his uncle on a trade journey to Syria. They settled in the city of Basra, which was under Byzantine domain, when Bahira the Nazarene (or according to many Christians "Nestorian") monk came out of his monastery to entertain the travellers. When he saw Muhammad, he took his hand and prophesied that the would be prophet of God. When asked how he could say so he pointed at Muhammad's an apple-like mark below his neck and warned that Muhammad should be taken back to Mecca before anyone in Bosra knew about this.

At age of 15, Muhammad صلى الله عليه وسلم witnessed the "Sacrilegious" wars between the Quraysh and their allies Banu Kinanah on one side and Qays 'Aylan tribe on the other. The wars continued with varying fortunes and considerable loss of human life for a number of years. It was thus called because the inviolables were made violable, the prohibited months being included. In one of those battles, Muhammad صلى الله عليه وسلم attended on his uncles but did not raise arms against their opponents. His efforts were confined to picking up the arrows of the enemy as they fell, and handing them over to his uncles.

Muhammad صلى الله عليه وسلم had no particular job at his early youth, but it was reported that he worked as a shepherd for Bani Saa‘d and in Mecca. At the age of 25, he went to Syria as a merchant for Khadijah bint Khuwaylid. Ibn Ishaq reported that Khadijah was a business-woman of great honour and fortune. She used to employ men to do her business for a certain percentage of the profits. The Quraysh were mostly tradespeople, so when Khadijah was informed of Muhammad, his truthful words, great honesty and kind manners, she sent for him. She offered him money to go to Syria and do her business, and she would give him a higher rate than the others. She would also send her hireling, Maysarah, with him. He agreed and went with her servant to Syria for trade.

When he returned, Khadijah noticed, in her money, more profits and blessings than she used to. Her hireling also told her of Muhammad’s good manners, honesty, deep thought, sincerity and faith. All these impressed Khadijah and she realised that she had fallen in love with Muhammad and wished to marry him. Many prominent men had asked for her hand in marriage but she always spurned their advances. She disclosed her wish to her friend Nafisah bint Maniya, who immediately went to Muhammad and broke the good news to him. He agreed and requested his uncles to go to Khadijah’s uncle and talk on this issue. Subsequently, they were married. The marriage contract was witnessed by Bani Hashim and the heads of Mudar. Muhammad gave Khadijah twenty camels as the dower. Muhammad صلى الله عليه وسلم did not get married to anyone until she was passed away.

When Muhammad صلى الله عليه وسلم turned forty (610 AD) and began to stay alone for long periods away from the city, it was at that time when he was once meditating and thinking about the mysteries of Allah's creations in a small cave called Hira in the Mount Jabal al-Noor ("Mountain of light") and, according to many scholars, on the 21st of Ramadan.

Archangel Gabriel appeared to him and commanded him, "Read!" Startled and scared, Muhammad replied, "I cannot read!" The angel commanded him again and this time the angel squeezed. On the third time the angel command to recite the verses: Proclaim! (or read!) in the name of thy Lord and Cherisher, Who created- Created man, out of a (mere) clot of congealed blood: Proclaim! And thy Lord is Most Bountiful,- He Who taught (the use of) the pen,-

Taught man that which he knew not. (Quran, Surah 96 (Al-Alaq), Verses 1-5) He, however, repeated the verses and came running home trembling and panting. He said to his wife "Cover me! cover me! (with a cloak or blanket)"Khadijah covered him until he restored security. He apprised Khadijah of the incident of the cave and added that he was horrified. His wife tried to soothe him and reassured him saying, "Allâh will never disgrace you. You unite uterine relations; you bear the burden of the weak; you help the poor and the needy, you entertain the guests and endure hardships in the path of truthfulness."

Condition of the world at the advent of IslamEdit 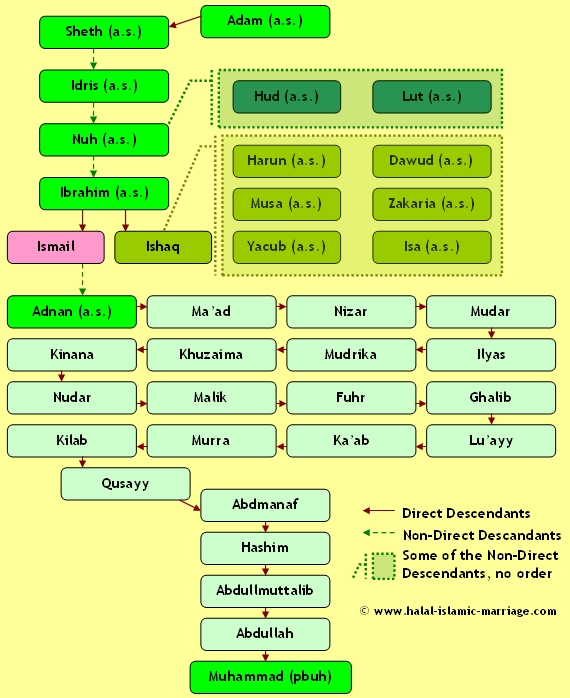 Biographies of the Prophet ("Seerat al-Nabiy")Edit

Retrieved from "https://islam.wikia.org/wiki/Prophet_Muhammad_(%EF%B7%BA)?oldid=11044"
Community content is available under CC-BY-SA unless otherwise noted.